Hope, She Wrote: On Writing A Handwritten Letter 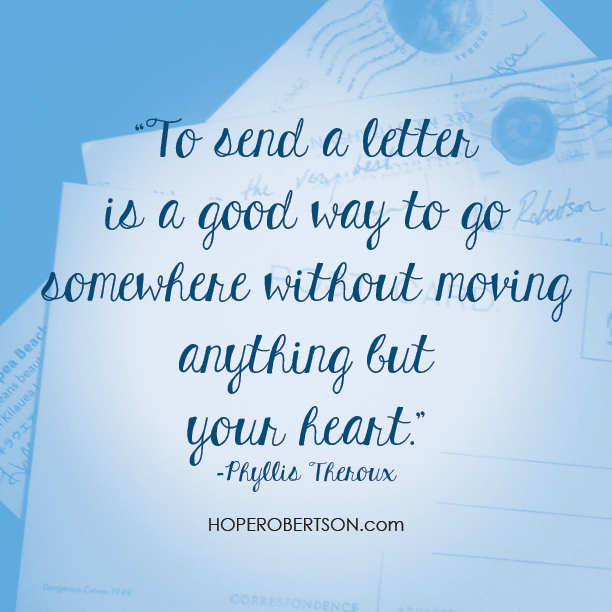 I’ve written on the art of handwritten notes before, however this week’s column is inspired by some of the sweet snail mail I’ve received so far in 2014 from friends across the globe and even close to home. I hope it inspires you to pick up a pen and paper, and write to someone who’s on your mind today.

P.S. Am I the only who preferred Jane Austen’s Persuasion to Pride and Prejudice?

Who doesn’t love, – upon opening their mailbox, – receiving an envelope with their name handwritten on the front. I’m not referring to bills, or information, I’m talking about receiving a letter or a card from a friend. Doesn’t receiving a handwritten letter of some kind make you smile?

They’ve been around for ages, though as we move toward a more digital society, handwritten letters seem to be on the decline. There are several things in the world that have seen great progress, but ironically there’s one area where we seem to be regressing rather than moving forward – the art of personal communication.

The exception being few, people no longer favour writing lengthy love letters or handwritten thank-you cards. It’s all BBM or texting (or whatever the kids are doing these days). It seems we’ve become such slaves to technology that we’re too lazy to write long-form. (And don’t even get me started on the removal of cursive writing from school curriculum.)

Some of the best examples of handwritten letters can be found in classic literature. Darcy wrote to Elizabeth, a long dissertation narrating everything they’d ever been through together, to prove to her that his intentions were true and that he wasn’t a total jerk (I paraphrase, but you get the point). Perhaps even more powerful and poignant than Pride and Prejudice is the letter that appears in Austen’s Persuasion, when Wentworth professes his love to Anne for a second time (even though she’d brutally rejected him years earlier) in an attempt to win her heart once and for all. (For the record, may it be noted that on both occasions, things worked out in favour of these famous literary couples.)

The power of the handwritten letter isn’t just limited to classic literature, either. In real life, handwritten letters can have incredible impact. Think of the words shared between Kennedy and Khrushchev during the Cuban Missile Crisis, or the letters that author Agatha Christie sent to her family and friends during an around-the-world tour that reveal both adventure and heart-ache in the life of a fiercely private woman.

There is something that can be so striking and impactful about the handwritten word. With this in mind, here’s a challenge for this week, should you choose to accept it: Write a letter or a thank-you card to someone you care about. It doesn’t have to be long-winded; just be sincere and be real. Too often I think we take for granted the people who surround and who support us. So why not show some heart?

Here are some tips on how to write a handwritten note: