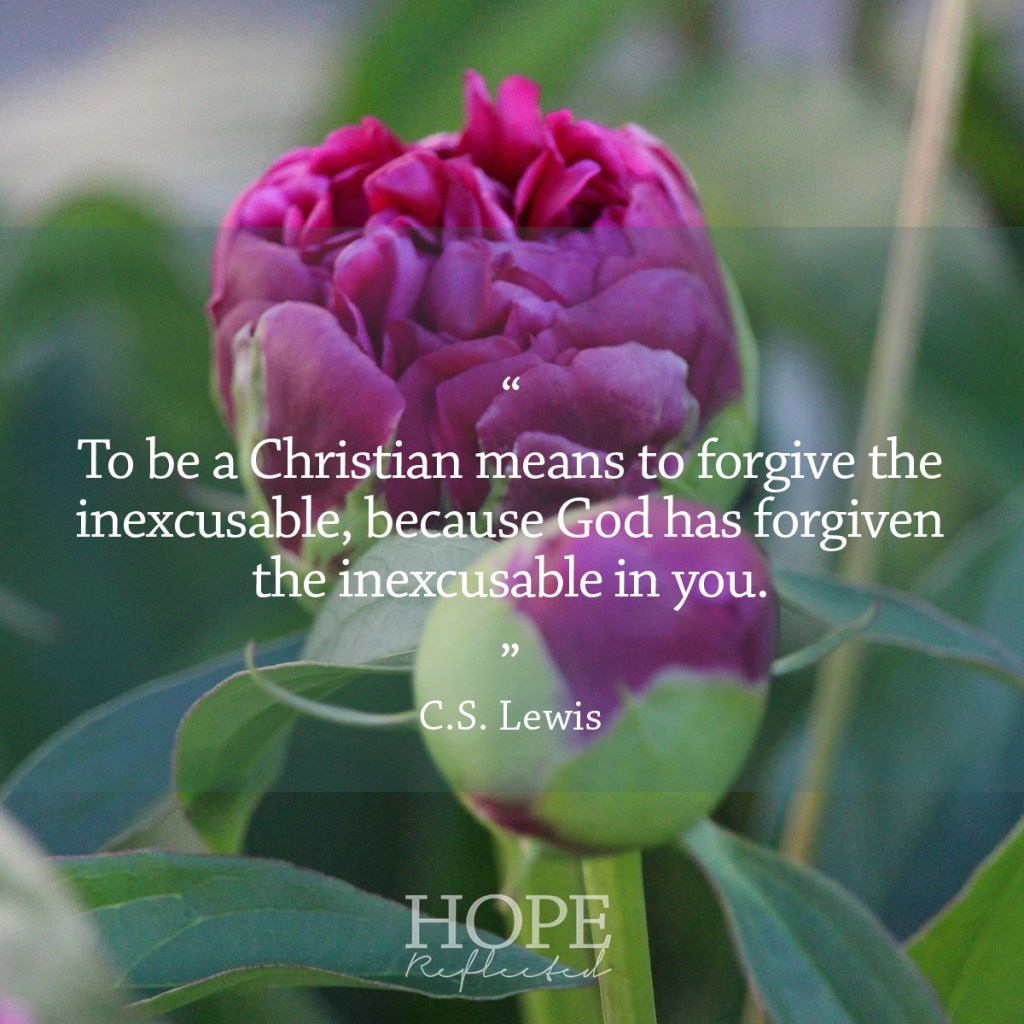 God’s forgiveness, in addition to being all-encompassing and an example for us to follow, is a great reminder to us of His everlasting love for us.

C.S. Lewis once said that, “everyone thinks forgiveness is a lovely idea until he has something to forgive.” It’s true, isn’t it? So often we’re quick to give out the advice to forgive, but when it comes to leading by example, forgiveness can be difficult. Not that drinking the poison of bitterness and resentment is any less difficult, but sometimes avoidance – of the truth, of hurt, of pain – disguises itself as the easy road.

There is so much that we can learn when we look to the Lord. His forgiveness is a gift.

God’s forgiveness is not an excuse to do whatever you want. “What shall we say then? Shall we continue in sin, that grace may abound?” (Romans 6:1) This may seem like common sense, but it’s surprising how many people think that God’s forgiveness is an excuse to carry on with sinful behavior. I’d argue the contrary, that God’s forgiveness and grace should be reason enough to do our best to live a faithful and holy life! He sent His Son to the cross for us, to die – that’s the ultimate sacrifice. To continue on in sin, and to not strive to be our best for God is like the ultimate insult and ungratefulness. Does that mean that we’re perfect? No, but it does mean that we even when we trip, we pick up our cross and keep going.

God’s forgiveness is an example. “Forbearing one another, and forgiving one another, if any man have a quarrel against any: even as Christ forgave you, so also do ye.” (Colossians 3:13) God’s forgiveness of our sins is an example of how we should forgive others. C.S. Lewis once said that, “to be a Christian means to forgive the inexcusable because God has forgiven the inexcusable in you.” Is it easy? No! Sometimes forgiveness can seem like the hardest thing. We want to focus more on our feelings than we do on Christ, and that’s part of being human. We should challenge ourselves however, to look to Christ’s forgiveness and follow His example, not just with others, but with ourselves as well. “I think that if God forgives us, we must forgive ourselves. Otherwise, it is almost like setting up ourselves as a higher tribunal than Him.” (C.S. Lewis)

God’s forgiveness is a gift. God’s forgiveness, in addition to being all-encompassing and an example for us to follow, is a great reminder to us of His everlasting love for us. He loves us enough to forgive us. “The great thing to remember is that, though our feelings come and go, His love for us does not. It is not wearied by our sins, or our indifference; and, therefore, it is quite relentless in its determination that we shall be cured of those sins, at whatever cost to us, at whatever cost to Him.” (C.S. Lewis)

“Let not your heart be troubled, neither let it