fear of the Lord Archive

Hope Reflected: What is the Fear of the Lord? 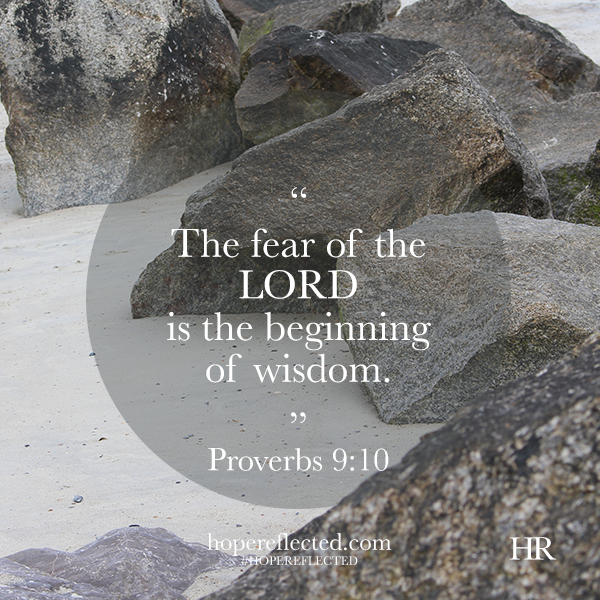 There are many references to the fear of the Lord throughout the Old and New Testaments of the Bible but what does it really mean to fear God?

This question is one that Wes and I have been discussing over the past week. It all started when we were talking about unreasonable fears, otherwise known as worries. As humans, we so often get caught up in fearing the future, what’s ahead, how a situation is going to turn out, or things we have no control over. We have fears here on earth, and then God commands us in Scripture to fear the Lord. So what does the fear of the Lord really mean?

The fear of the Lord really takes us out of the equation. To put it simply, having a fear of God means not thinking more of ourselves than we ought to, and recognizing that the Lord is the only one who can save us from eternal damnation. He controls EVERYTHING. Not just the entire world, but the entire universe, and even galaxies and things that we know nothing about. Our redemption is nothing that I can do, or think, or say, or overanalyze; no, the fear of the Lord means honouring Him as our rescuer and salvation.

As Christians, we should have a healthy viewpoint of the fear of the Lord. The fear of the Lord is not a bad thing; it’s a good thing! It’s like true love: You cannot truly love someone without being vulnerable. How else can we fully comprehend the extent of God’s love for us if we don’t first have a fear of Him?

The Bible is filled with examples of the fear of the Lord. Think about the true story of Joseph in Genesis, or Moses (and all points in between) in Exodus. Think about Paul’s inspired words throughout Romans and his letter to the Corinthians, and John throughout his epistles.

I love how R.C. Sproul describes the fear of the Lord in his article, “What Does it Mean to Fear God?” He says, “If we really have a healthy adoration for God, we still should have an element of the knowledge that God can be frightening. ‘It is a frightening thing to fall into the hands of the living God’ (Heb. 10:31). As sinful people, we have every reason to fear God’s judgment; it is part of our motivation to be reconciled with God.”

When we have an understanding of the fear of the Lord, it should put things into perspective and set our priorities correctly here on earth. It makes it easier to remember (easier, not easy), that whatever you’re facing in front of you is never bigger than the God inside you.