words to live by Archive

Hope Reflected: Learning How To Live ‘Less is More’ 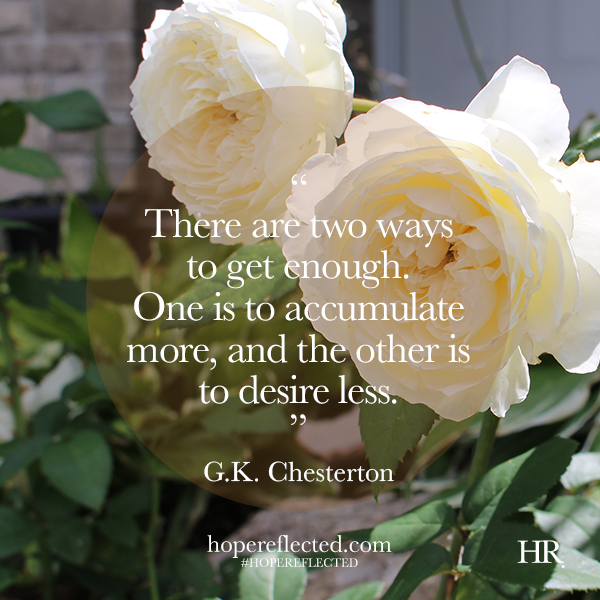 This past weekend, Wes and I found ourselves fighting the crowds at a popular department store. If you know me, you know I’m not a fan of a ga-zillion people invading my personal bubble, but there I was, in the midst of the store, trying to find a few boxes in which to put Christmas gifts. Whilst we were waiting in line at the checkout, and we observed all the people wandering around picking up random items, I thought to myself how it’s entirely possible – and probably more common than I understand – that some people can have everything, and at the same time, have nothing.

As we head into the American Thanksgiving and Christmas seasons, I think the feelings of longing and emptiness are magnified. While some others seem to dread their approach, I find myself giving thanks to the Lord that I look forward to these beautiful seasons each year.

G.K. Chesterton once said, “There are two ways to get enough. One is to accumulate more, and the other is to desire less.” During our devotions last week, this quote struck both Wes and myself. How often do we look to fulfill our longings with things? To fill an empty spiritual void with relationships?

Looking at it from a Biblical perspective, there are several times throughout the Bible when we’re told of the strength of a relationship with God and His love and how powerful that is over “things”. Consider these three instances in the book of Proverbs:

You may find yourself asking how it’s possible to “desire less” as G.K. Chesterton said. Really, it’s not that hard when you know the Lord as your Saviour. I love the unattributed quote that says, “it is not happy people who are thankful; it is thankful people who are happy.” It’s so true. When you have a personal relationship with Jesus Christ, you learn the values of gratitude, humility, and love.

It may not always be easy to live with an attitude of gratitude, but when I find myself unsatisfied, or thinking, “If we could just have this or be able to do this, I’d be happy,” I have to catch myself. It’s only when I take the time to purposefully count my blessings and consider all the ways the Lord is working in my life, that I truly become content, and stop longing for things that I don’t need.

My challenge to you as we enter this holiday season, is to start your own prayer journal – trust me, it will quickly turn in to a gratitude journal, and in times of discouragement, you’ll be able to look back and consider the Lord’s goodness in your own life.

Hope Reflected: What Goes In, Must Come Out 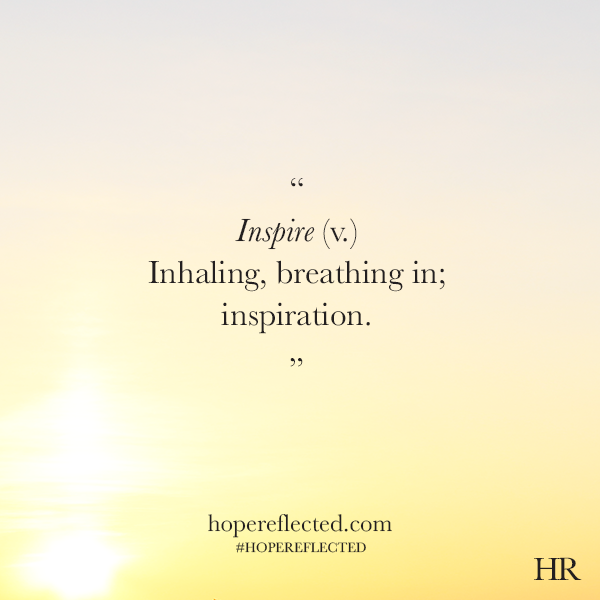 Whether it’s the snow melting, or the birds singing, several people have said over the past week that they’re feeling invigorated and inspired.

Inspire. What a word! First used in the 1300s, the word inspire comes from the Latin inspirare, meaning, “inspire, inflame, blow into,” from in “in” and spirare “to breathe”.[1]  Another definition comes from the French inspiracion, meaning “inhaling, breathing in; inspiration.” When we are inspired – whether by a person, place, or thing, – we are stimulated, excited, and influenced. The word inspire is the breathing in of something and actually being affected by it. When it’s put in such vivid terms, I can’t help but think about what inspires me. There are so many people, so many places, and so many things that I would count as inspirations. And while I’m a person who by nature has a fairly positive outlook on life (my name is Hope, hello), I can’t help but think about what inspires angry people, or those with a particularly pessimistic attitude. Sure, some of it might be built into their nature, but ultimately, we’re all influenced and inspired in some way, by something.

If you’re a computer science type, you’re familiar with GIGO (garbage in, garbage out). The information a computer outputs depends entirely on the input. Not to draw a parallel between computers and humans, but same story when it comes to us. What we allow into our minds and our hearts through the gates of our eyes and our ears will inevitably come out and be displayed through our actions and the words that come out of our mouths. Have you ever met someone who has a bad attitude or who’s “mad at the world”? Chances are, they really don’t censor much of what they let their eyes see and their ears hear. If you listen to intense, anger-filled music, be prepared to have an intense, angry outlook. Watch violent and profanity-filled films? You put yourself at risk to become desensitized, or even a producer of those behaviors and words in your own life. It’s like food poisoning, really. If you eat contaminated food, well, be prepared for what’s going to come out…

It’s inevitable through life that we’re going to see things that we’d rather not see, and hear things we’d rather not hear, but does that mean we shouldn’t be proactive and protect ourselves? Absolutely not! We should all establish safeguards against potential negative influences. If you know that certain genres of music elicit feelings of depression, anger, or sadness in you, don’t listen to that music! Same with movies and TV; if you know that show will cause you to think about things you’d rather not consider, then don’t watch it. Each of us has a responsibility to protect and nurture our hearts and minds. That goes for real life, too. If you’re someone who enjoys listening to the “coffee shop talk” and hearing critical assessments of your peers, you put yourself at risk to pick out the faults in others and speak critically. If you wouldn’t say it to that person’s face, you definitely shouldn’t be saying it behind his or her back.