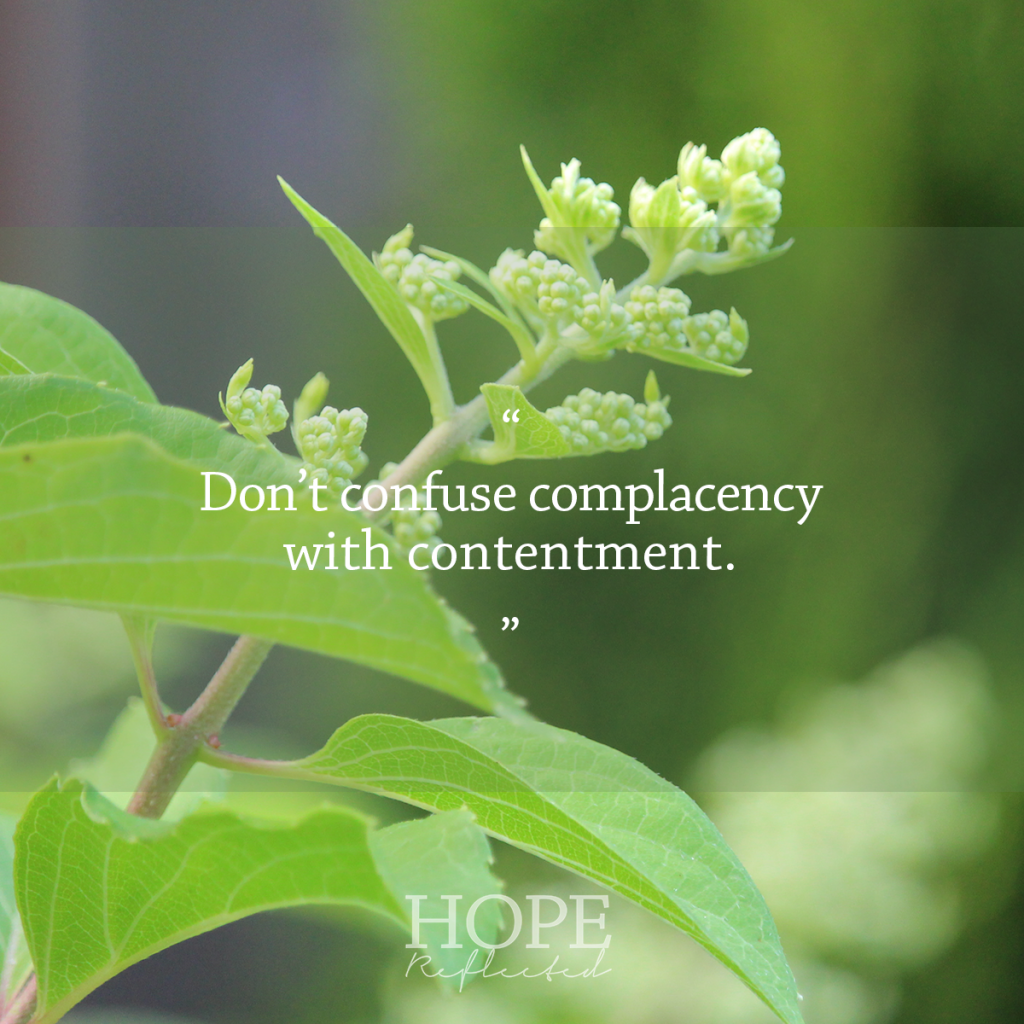 Complacency is rooted in pride, self, and idleness, while contentment is rooted in gratitude, thanksgiving, and active faith.

Complacency says, “Wow, look at everything I’ve accomplished,” while contentment says, “Thank you for all that you’ve blessed me with.”

Complacency fools you with conceit, while contentment fills you with humility.

Complacency tells you to stay where you are, while contentment encourages you to grow in your faith.

The book of Proverbs explains complacency vs. contentment in several verses:

Complacent people tend to be more slothful and sluggish; they’re of the mindset that they don’t have to work hard or strive to be better because they think they’re already the best, that they’ve already “arrived”. Content people are thankful for where they are, but they understand and appreciate the value in working diligently and in continuing to grow.

It’s easy to fall into the rut of complacency, but learning contentment is the only way to grow and move forward. 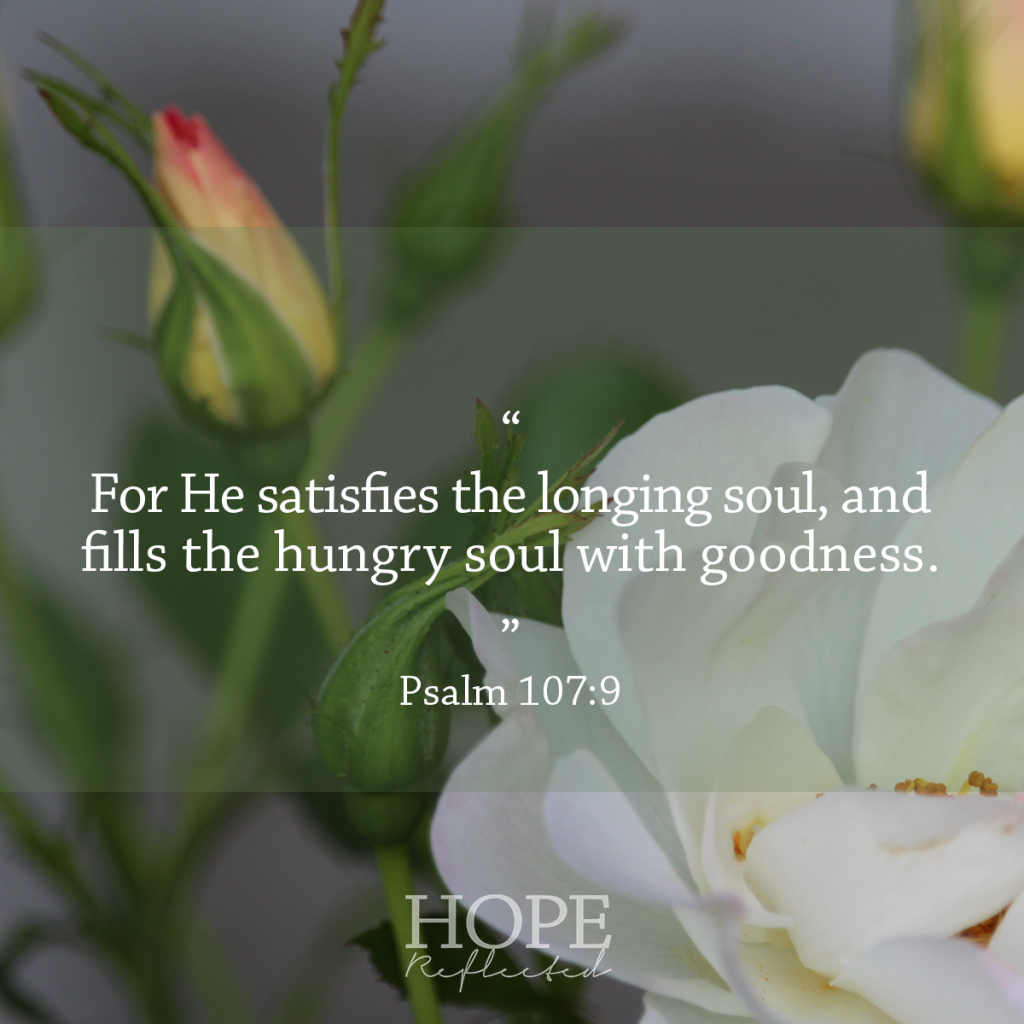 “For He satisfies the longing soul, and fills the hungry soul with goodness.” (Psalm 107:9)

David wrote Psalm 107 as a prayer of thanksgiving to God. Thanksgiving is a huge key to contentment. I love Psalm 107:9, which reads: “For He satisfies the longing soul, and fills the hungry soul with goodness.” You know that feeling of satisfaction when you’re really thirsty, and you take a drink from a nice, tall glass of water? Or what about when you’ve working all day with little or no time to break for food, and you sit down to enjoy one of your favourite meals?

Having a relationship with God has a similar effect. Only God can satisfy the deepest longings of your soul, and only He can fill your hungry soul with goodness.

If you’re looking for true contentment, consider these suggestions:

The next time you catch yourself longing, look to God. Only He can satisfy the longing soul and fill the hungry soul with goodness. You’ll only ever be truly content when you know the Lord as your Saviour.

“For He satisfies the longing soul, and fills the hungry soul with goodness.” (Psalm 107:9) 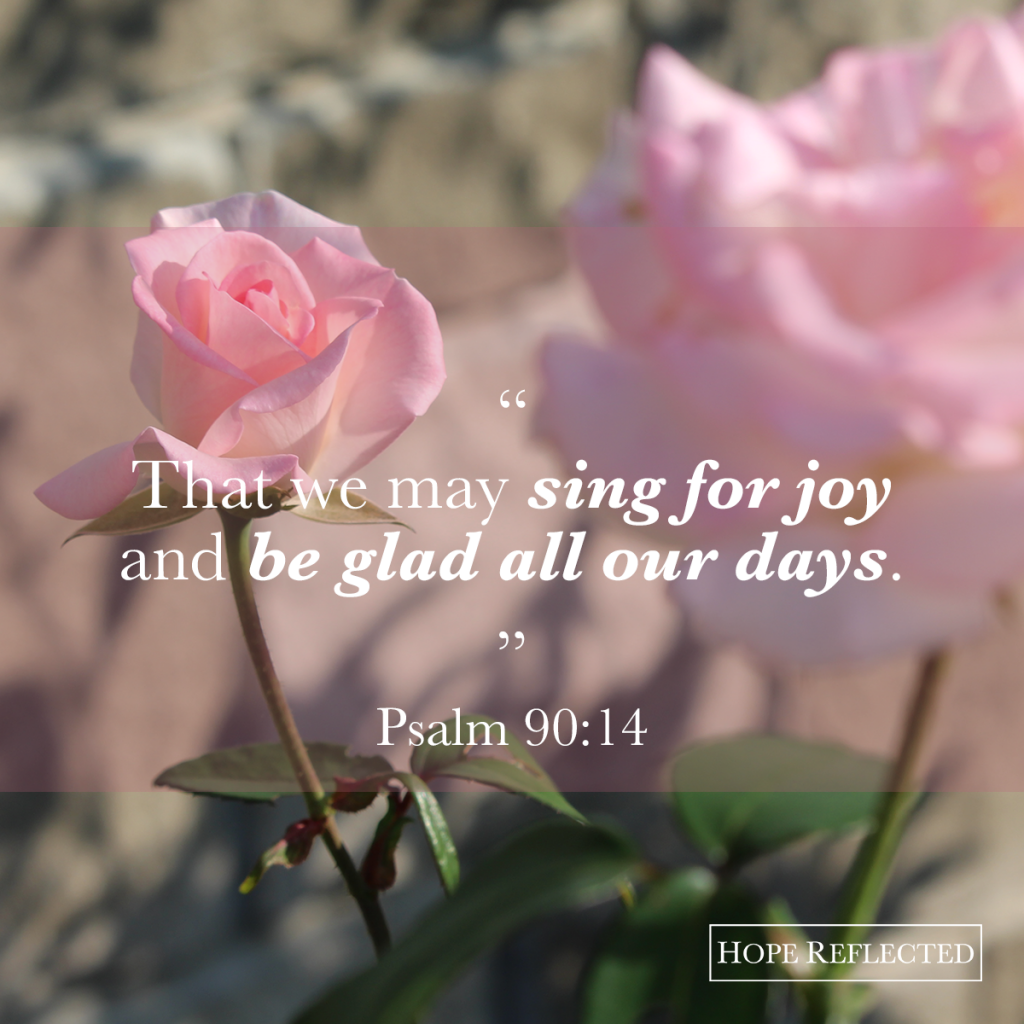 Like most holidays, Thanksgiving comes and goes in the blink of an eye. In fact, here we are less than a month after Canadian Thanksgiving, and you’re more than likely already thinking about other things. More than a choice, having an attitude of gratitude the whole year through is possible when you have a grateful heart. So what are the characteristics of a grateful heart?

Above all, the grateful heart realizes and treasures what is truly important. What’s in your heart? Is your heart a home for our Lord and Saviour? Or is your heart focused on building an earthly empire? Your answer will determine your eternity. The only One who can truly satisfy the human heart is the One who made it. There’s a longing in each heart that only Christ can fill (Psalm 90:14).

Hope Reflected | The Importance of Being Prepared 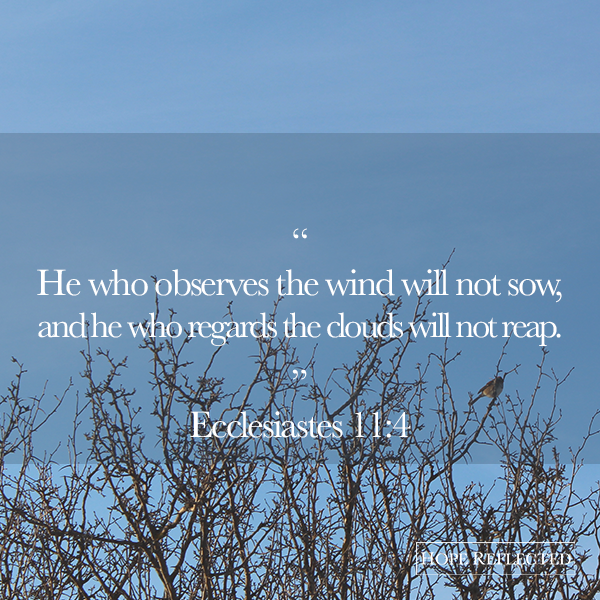 The Importance of Being Prepared

An old adage says, “A Saturday well spent brings a week of content.” There is so much truth packed into this little saying, as what you do over your weekend has a lot to do with how your week rolls out. Taking time before the week begins – to prepare meals, study work notes, finish home work, and get ready for any meetings – to prepare for each day can make a huge difference in both your confidence level and also achieving the goals you set!

Benjamin Franklin was famously quoted, “By failing to prepare, you are preparing to fail.” If you don’t spend time getting yourself ready for the week ahead, or preparing yourself for tomorrow, you’re essentially missing the most crucial step towards success.

The Bible talks a lot about the importance of being prepared. While it’s not always easy, here are just a few things that the Bible says about being prepared:

To be prepared, don’t procrastinate! Give thought to what you need to do, write down and set goals for yourself, and then create a plan to achieve and succeed. Don’t postpone things, do your best, and learn from the experience of others. Remember, sometimes the best way to get things done is simply to begin. Being prepared pays off in the long run!

Originally published as “It pays to be prepared: What the Bible says about being prepared.” Minto Express, Independent Plus, Arthur Enterprise-News, Mount Forest Confederate. January 19, 2017: 7. Print.

Wednesday Wisdom | When you love what you have, you have everything you need 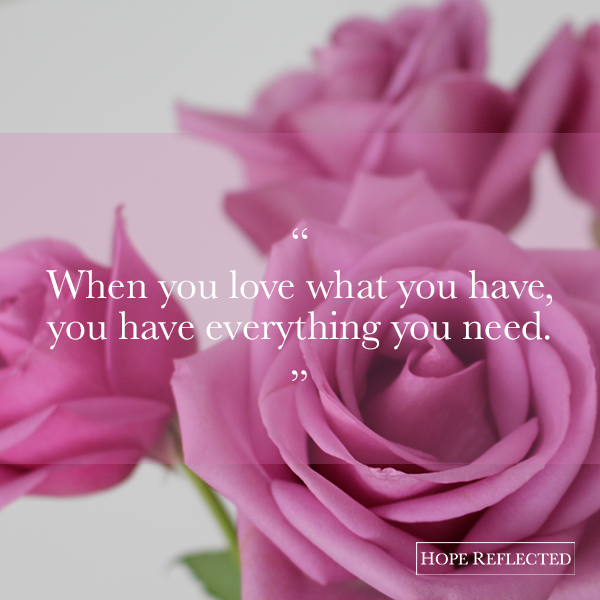 “When you love what you have, you have everything you need.”

In my column, “Some Habits Are Actually Good,” I talked about learning to be content with yourself. You learn contentment when you make the choice to stop comparing yourself to others and competing with others. The grass isn’t greener on the other side; the grass is greenest where you water it.

You learn contentment when you continually give thanks and practice an attitude of gratitude.

You learn to love what you have when you’re content.

So what does the Bible say about contentment and gratefulness?

There are so many verses throughout the Bible about contentment and gratefulness. The key to contentment is living with an attitude of gratitude, and the key to loving what you have is learning contentment!

“When you love what you have, you have everything you need.”

Hope Reflected: Standing Up For What You Believe In 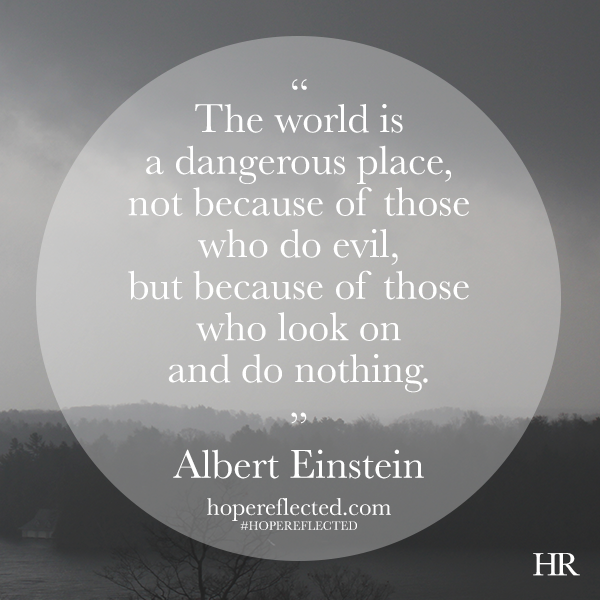 Especially with recent world events, it’s more important now than ever before to be secure in your personal beliefs. With today’s society, it would seem that everyone has an opinion, and the more abstract and obscure, the more popular you become. We live in a world that tends to place more value on the love of money than on human life; where having a whole family is considered ‘weird’; and where being unconventional has become commonplace. These things, among others, have really got me thinking about the importance of standing up for what I believe in.

Here are three facts about the importance of standing up for what you believe in:

Standing up for what you believe in takes courage.

Standing up for what you believe in builds confidence.

Psalm 3:6 (KJV) says, “I will not be afraid of ten thousands of people, that have set themselves against me round about.” David was fleeing from his son when he wrote this, but he knew that ultimately standing up for what he believed in was more important than finding favour in the eyes of others (even his own son). When you stand up for what you believe in, you build confidence in your character.

Standing up for what you believe in breeds contentment.

It’s not always easy to stand up for what you believe in, however when you do, standing up for your beliefs breeds contentment. When we know what we believe in, and we have the evidence to back it up, we can rest content. Timothy says in his letter, 1 Timothy 6:6-7 (KJV) , “But godliness with contentment is great gain. For we bought nothing into this world, and it is certain we can nothing out.” When you have a firm foundation, and the evidence to back up your beliefs, you can rest content.

There’s an old saying, “He who stands for nothing will fall for anything.” Be sure you have a firm foundation for your beliefs, and that you have evidence to back up what you stand for. The worst thing is to fall for popular opinion, or to agree with the latest headline just because it’s published by your favourite news source. Truly research the answers for yourself. Be your own filter.

Originally published as “Standing Up For What You Believe In”. Minto Express. October 7, 2015: 5. Print. 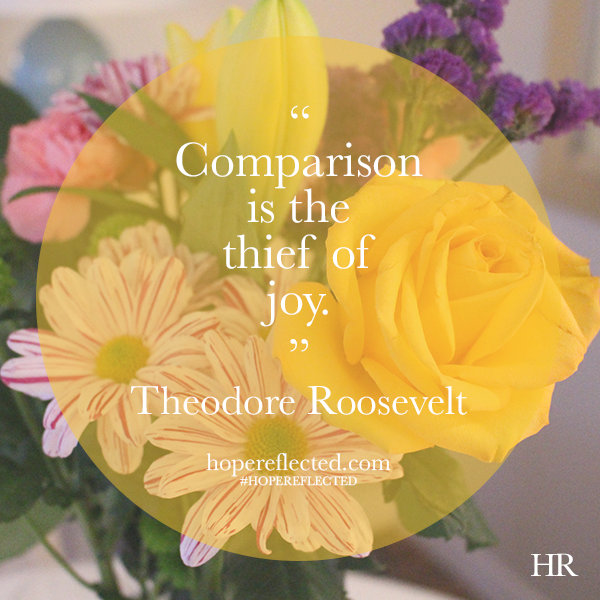 As a young girl, I was an avid Barbie collector. With each allowance, birthday, or celebratory holiday (or even sometimes just because), my Barbie collection grew to include upwards of thirty to forty dolls, complete with all the accessories – Barbie convertible, Barbie funhouse, Barbie dog – but I can remember specifically visiting my cousin’s house and seeing her collection – which included the enviable Barbie mansion – and thinking, “I really, really want the Barbie mansion. Like, really!” I’m pretty sure every one of us has a similar story from our childhood.

So what does Barbie have to do with contentment? It’s not the Barbie doll per se, it’s the principle of the story. Too often I think we look at our friends and neighbours and – whether consciously or not – start thinking the grass is greener on the other side. But the fact is, the grass is greenest where we choose to water it! It’s important to be satisfied with what God has given us. Not to say that we shouldn’t have drams and goals that we work towards, all I mean is that we need to place value on the blessings that we already have.

So what does the Bible say about contentment?

Content people are not always happy people, but content people are consistent, thankful, and more likely to be loving and grateful for the people around them. There’s the old saying that goes, “When we pursue happiness, we flee contentment.” Stop, take a look around, and purposefully count your blessings. Choose something today – or someone – for which you’ll practice an attitude of gratitude.

When Nehemiah heard of the desolation of Jerusalem