Sometimes it feels as though everyone is against us

Hard feelings seem to be readily available, while harmony is in short supply. We don’t have to look far to find these feelings, even within ourselves.

David experienced a lot of pain in his own life, and while many of us are more familiar with the account of Saul’s pursuit of David, we often forget the grief that David bore when he was betrayed and chased away by someone in his very own family – his son, Absalom. Because of Absalom’s rebellion, David had to flee Jersualem, and the situation was so dire and hopeless that David sought refuge with his enemies.

“for man would swallow me up”

“Be merciful unto me, O God: for man would swallow me up;” David wrote in Psalm 56:1, “he fighting daily oppresseth me.” While perhaps not to the extent that David experienced, we have all gone through times when it feels as though others are “fighting daily” against us. The longer we let bitterness, contempt, and resentment continue, the harder they are to let go of. The struggle is as real today as it was then. David reiterated, “Mine enemies would daily swallow me up: for they be many that fight against me, O thou Most High.” (v. 2).

When times are challenging and the going is rough, when it seems as though everyone is “fighting daily” against us and we are experiencing pain, stress, and strife, how do we respond? Many turn inward, preferring to bottle up emotions rather than pour out their hearts. David’s first response was to ask God for help. “Be merciful unto me, O God:” (v. 1). When facing contempt, David asked for God’s compassion.

“What time I am afraid, I will trust in thee.” David continues in Psalm 56:3. In life, guaranteed there are times that we will be afraid, that’s a sure thing. The key to getting through it is consciously choosing to trust in the Lord to bring us through fearful times. Spurgeon said that, “Faith brings forth praise. He who can trust will soon sing.” Somehow, even while being pursued by his son and his son’s army, David was courageous and praised the Lord. He purposed to put his focus and his trust in the One who is greater than any man, any army, or any challenge we may face. “In God I will praise his word, in God I have put my trust; I will not fear what flesh can do unto me.” (v. 4).

When people twist our words, act maliciously, and purposefully try to put us out, our response is so important. We can allow our challenges to foster bitterness, unforgiveness, and resentment, or we can ask God for His mercy and help. Committing it to the Lord sometimes needs to be done repeatedly, multiple times a day, as we can all be forgetful people who find it hard to focus. As Tozer wrote, “Our Lord came not to destroy but to save. Everything which is safe we commit to Him, and nothing is really safe which is not so committed.” 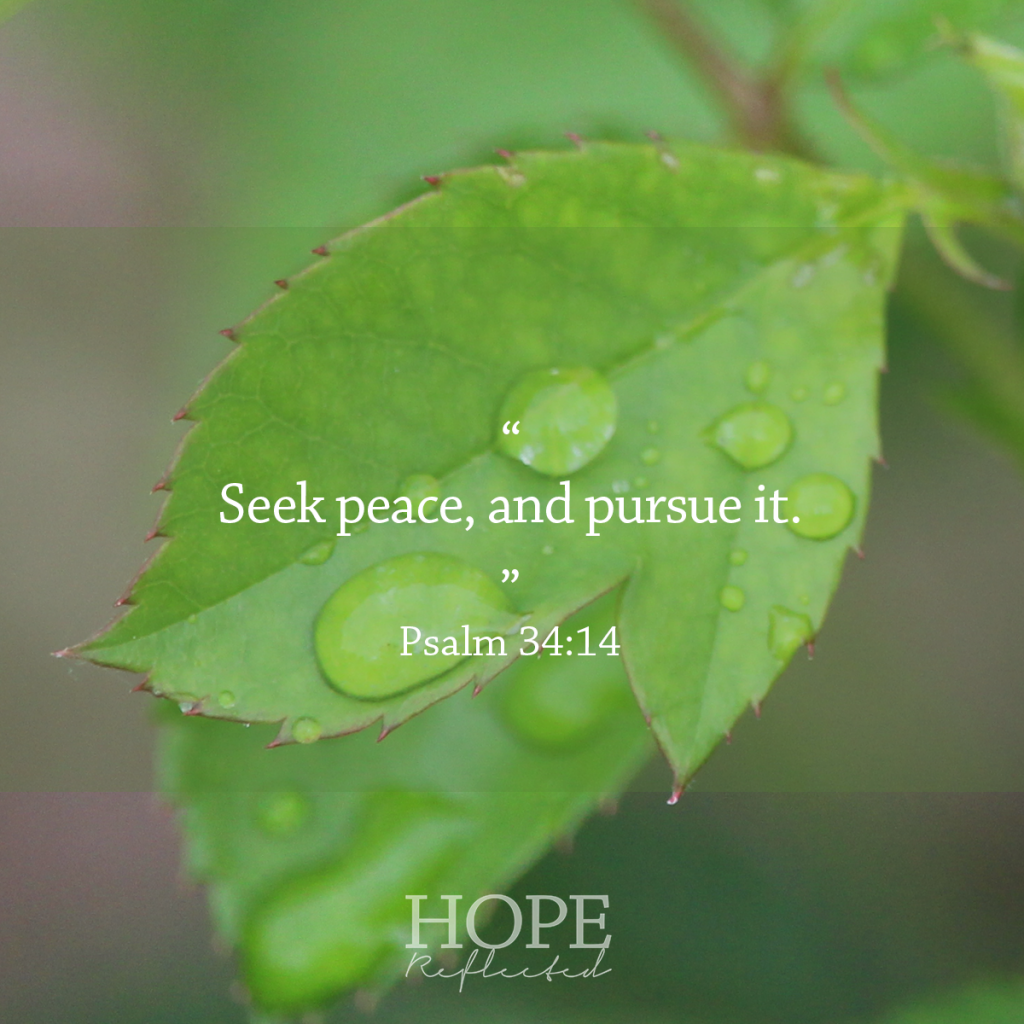 When you have a personal relationship with our Lord and Saviour, peace is possible.

“Daniel slept in a lions den, Peter slept in a prison, Jesus slept in a storm. No matter your circumstance, you can take a nap.” Last week when I saw this meme I laughed out loud. Upon further consideration however, I realized how true that statement actually is, because of God. I think most of us would be in agreement that when you’re going through a stressful time, you don’t sleep as well. Your mind wanders. You can’t concentrate. You can’t rest.

Peace, it would seem, often eludes people during times of distress.

In an effort to capture peace, people search many different avenues, such as meditation, yoga, healthy eating, even exercise. The truth is though, that there is only one way to achieve true peace, the “peace that passes all understanding.” (Philippians 4:7) It’s through God. When you have a personal relationship with our Lord and Saviour, eternal peace is possible. And trust me, it’s a reassurance unlike any other!

Does that mean that you won’t ever encounter stressful situations or hard times? On the contrary! However, even in the midst of adversity and trying times, peace is possible.

In Psalm 34:14, we’re encouraged to “seek peace, and pursue it.” Just make sure you’re looking for peace in the right places. There’s only one peace that passes all understanding, and that’s the peace of God. Not sure how to find it? All you have to do is ask Him! 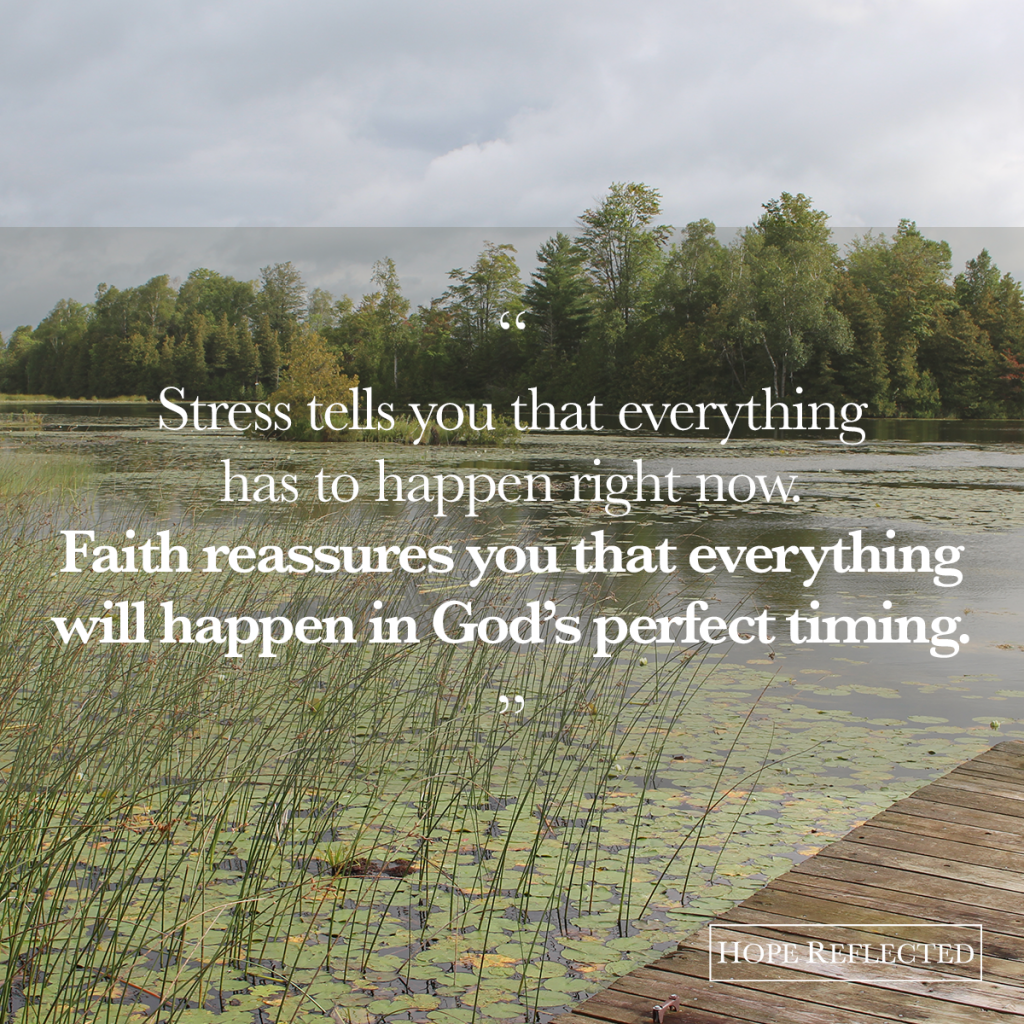 A friend of mine shared this quote on Facebook the other day, and it reminded me of the importance of keeping our focus on God and His perfect timing — even when we feel like He can’t hear us. Isn’t it true? So often, we go to the Lord in prayer seeking an instant answer to a prayer request, or so confident in our own plan, when really, we ought to rest in Him and wait patiently for His perfect timing rather than rushing.

Elisabeth Elliot once said, “Don’t dig up in doubt what you planted in faith.” When we make a conscious effort to keep our focus on God, we strengthen our faith. Here are 10 encouraging Bible verses for when you’re feeling stressed or if you need reassurance of God’s faithfulness.

These are just 10 Bible verses for when you’re feeling stressed, anxious, worried. The Bible is filled with so many encouraging and uplifting verses. Dig into God’s Word and let faith reassure you. Rest in the LORD and wait patiently for Him!