Bold as a lion

“Be sober, be vigilant; because your adversary the devil, as a roaring lion, walketh about, seeking whom he may devour:” (1 Peter 5:8). Anyone who’s watched a documentary about lions understands the picture being described here. A roaring lion is both fierce and hungry, with a powerful roar that can be heard up to 8km away. Lions have a distinctive prowess; they act gracefully and swiftly to take over their prey – even when their prey is running in the opposite direction.

Peter warned believers that the devil is “seeking whom he may devour,” walking and watching for the best opportunity to destroy Christians. If he fails at one attempt, most assuredly he will continue trying until he succeeds.

Lions are not afraid to face each other head on

Fortunately, this is not a one-sided battle. The Bible not only describes the devil as a lion; this mighty animal is used to illustrate Christians as well. “The wicked flee when no man pursueth:” Proverbs 28:1 opens, “but the righteous are bold as a lion.” Bold as a lion not only in the sense of our ability to pursue, but also bold as a lion that is not afraid to face another lion head on. Observation of nature has shown us that lions will fight one another in situations when they are threatened, when their cubs are in danger, and when another lion assaults their territory.

Fellow Christians, we are not to turn away in times of adversity, we are not to shrink back and sulk away silently when our beliefs are openly contradicted and wrongfully made out to be backwards; these are the very times that we are trained for. The confrontations that we face courageously every day prepare us for even greater adversaries.

Consider David, who before defeating Goliath bravely killed a lion that threatened his sheep (1 Samuel 17:35). Look at Samson, who before destroying the temple and defeating the Philistines, killed a lion that attacked him (Judges 14:5-6). Famously, Daniel was cast into a den of ravenous lions and demonstrated courageous bravery the whole night through, and then his accusers were cast in and destroyed by the same lions before they reached the bottom of the den (Daniel 6:20-24).

Be prepared to give an answer

Paul wrote in his letter to the Philippians that Christians become more confident when they see other Christians boldly “speak the word without fear” (Philippians 1:14). What do our brothers and sisters in Christ see when they look at us? We are exhorted in 2 Timothy 2:15 to “Study to shew thyself approved unto God, a workman that needeth not to be ashamed, rightly dividing the word of truth.” Are we working for God, are we prepared to give an answer for the hope that is in us when someone questions us or contradicts what’s right?

We should not be ashamed! Unfortunately, we often avoid giving hard answers because we want to be liked and we want to be comfortable. In doing so, we become cowards, and we teach our children the same. Matthew Henry wrote that, “Sin makes men cowards. Whatever difficulties the righteous meet in the way of duty, they are not daunted.” Christian lions need to stop basking and start being bold.

Read more about being bold here.

We can be bold because our confidence rests in the Creator

“The righteous are bold as a lion.” (Proverbs 28:1) Today, boldness is not often a characteristic that is associated with Christians, however it is a trait that each of us should have. While it’s certainly not the popular thing to stand up for Biblical truth and Christian values, that is exactly what we are called to do. How can we put on the whole armour of God if we aren’t being bold? To be bold – in the Biblical sense – doesn’t mean to be proud or full of yourself; to be bold is to be strong, to be courageous, to stand up for the truth, and to go forward in confidence. A.W. Tozer once said that, “Christians should be the boldest people in the world; not cocky and sure of ourselves, but sure of Him.”

Our Lord and Saviour Jesus Christ was certainly bold, and we also read throughout the New Testament that Jesus was meek. To be bold requires us to be meek. Often confused with weakness – perhaps because the two words rhyme? – meekness is actually the opposite of weakness. Meekness was one of Christ’s attributes. “For I am meek and lowly in heart,” He said in Matthew 11:29. To be meek is to be humble, to be true, and to be assured but not arrogant. As 2 Timothy 2:25 instructs us, we are to instruct those that oppose us “in meekness”. Meekness doesn’t mean being confrontational, but it does mean being bold.

Because of Christ, we can and should be bold

To be bold also requires us to know what we believe and why, and to “be ready always to give an answer to every man that asketh you a reason of the hope that is in you.” (1 Peter 3:15). We can live boldly when we have a solid understanding of God’s Word. Christ said in John 15:7, “If ye abide in me, and my words abide in you, ye shall ask what ye will, and it shall be done unto you.” We can only have that boldness when we have God’s Word in our heart. Studying the Scriptures and memorizing Bible verses are two excellent ways to grow in your faith and to gain a deeper understanding – and appreciation for – God’s Word. In 2 Timothy 2:15, we understand that we are to “study to show thyself approved unto God, a workman that needeth not to be ashamed, rightly dividing the word of truth.”

We need not to be ashamed of our faith; we need to be bold. When you’re feeling timid, consider this: We can be bold because our confidence rests in the Creator of the universe. We are created in His image (Genesis 1:27). We have the privilege of going to God at any time, regardless of where we are or what’s going on around us. In fact, Christ invites us to cast all our cares at His feet! Because of Him, we can and should be bold. “Let us therefore come boldly unto the throne of grace, that we may obtain mercy, and find grace to help in time of need.” (Hebrews 4:16) 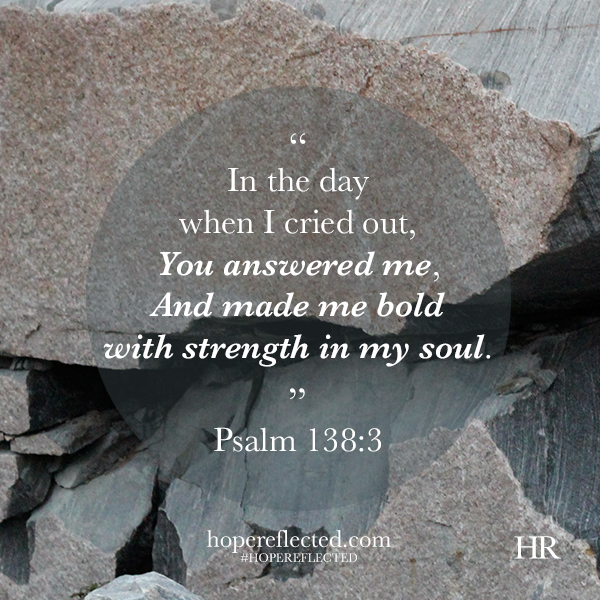 Psalm 138 is one of the most encouraging psalms. Written by David, a man after God’s own heart, Psalm 138 is filled with some amazing truths.

“In the day when I cried out, You answered me, And made me bold with strength in my soul.” Psalm 138:3

One of David’s psalms, Psalm 138 is so encouraging and inspiring. It speaks of whole-hearted praise for God, worship of His Holiness, God’s lovingkindness and truth, the power of God’s Word, God’s ways, and so much more.

Perhaps my favourite verse from this Psalm of praise is verse 3, when David says: “In the day when I cried out, You answered me, And made me bold with strength in my soul.”

This verse tells me at least four facts:

We serve an amazing God, and He longs to have a relationship with us, and to provide for us. If you’re looking for examples God’s goodness, check out any number of the encouraging psalms. Written by various authours who faced various challenges—and received various blessings—throughout their lives, the psalms are some of the most inspiring and incredible chapters of the Bible. All we need to do is cry out to Him! Wherever you are today, God is there for you, He will answer your prayers, He will make you bold, and He will provide you with strength for your soul! God is good!